Godzilla is such a misunderstood creature.

Yes, he’s bigger than a skyscraper. Yes, he looks like a people-eating monster. Yes, he breathes radioactive fire.

But deep within, he’s benevolent. He’s loving. He wants to help humanity.

At least, that’s what Dr. Ishiro Serizawa thinks. He and his fellow scientists within the crypto-zoological agency known as Monarch are studying Godzilla – and other titans – to determine which ones are good and which ones are bad.

Many people agree with the government. Who can blame them? These mythical super-creatures destroyed cities and killed countless people when they unexpectedly rose to the surface. They lived undisturbed within the earth for millennia – and most people want them to go back.

The film Godzilla: King of the Monsters (PG-13) opens this weekend, starring Ken Watanabe (Godzilla) as Serizawa; Vera Farmiga (The Conjuring series) as his colleague, Emma Russell; and Kyle Chandler (Manchester by the Sea) as Russell’s ex-husband, Mark.

Here are seven things you should know:

1. It’s Part of the ‘MonsterVerse’ 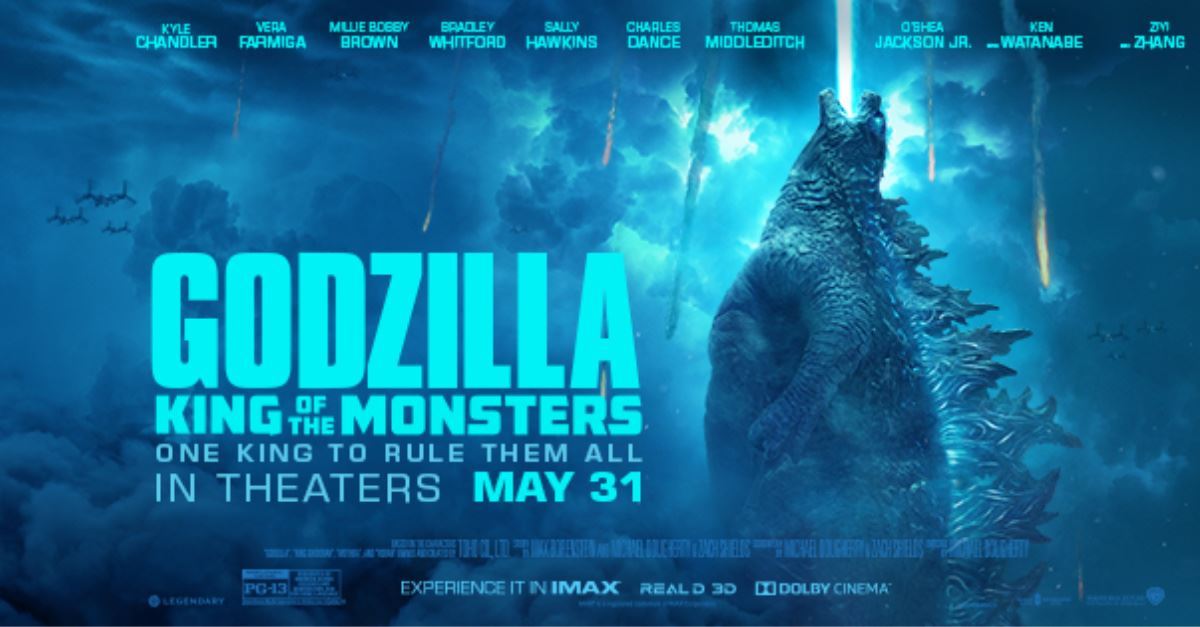 Back in 2015, Legendary Pictures and Warner Bros. announced a new franchise of movies based on the giant mythological monsters that were popular in films of yesteryear. This new franchise began a year earlier with Godzilla(2014) and continued with Kong: Skull Island (2017). King Kong doesn’t make an appearance in Godzilla: King of the Monsters but will in 2020’s Godzilla vs. Kong. The companies are building on a strong history of interest in the characters. The 1933 King Kong film regularly ranks among the greatest films of all time, and the 1976 remake was a box office hit. Godzilla has appeared in 30-plus films – most of them marketed to a Japanese audience.

2. It’s All about Destruction 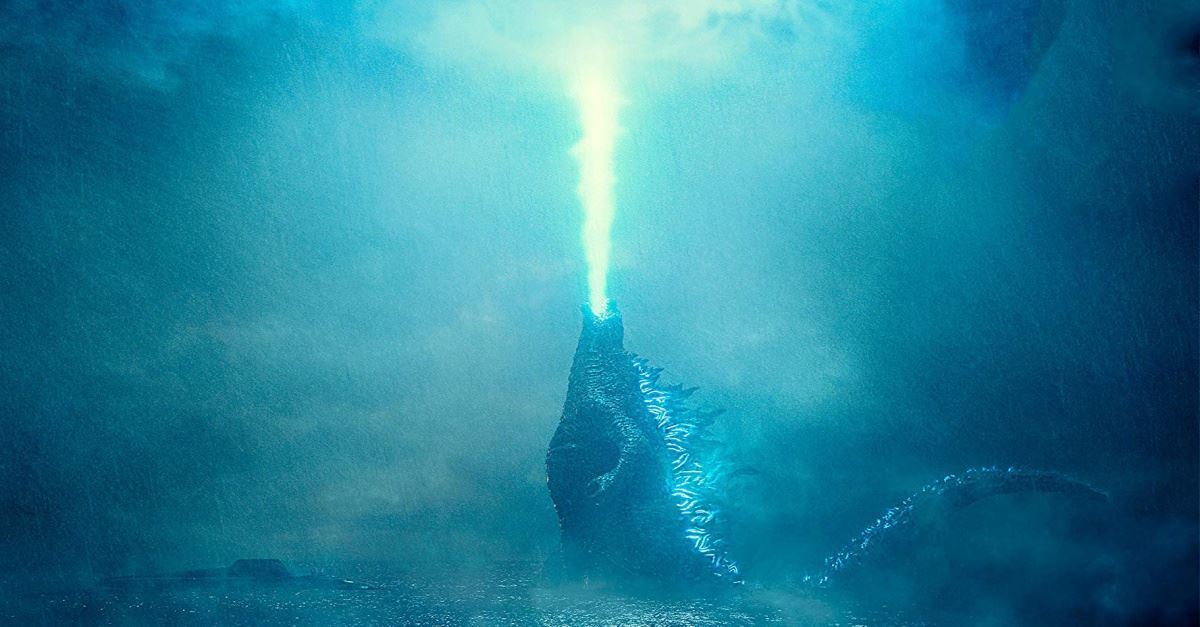 I’m glad Godzilla is on our side, but there aren’t many buildings left standing by the movie’s end. Washington, D.C. gets destroyed. Boston does, too. So do islands and mountains and beaches. There’s destruction at the beginning, the end, and everywhere in between. These titans are immune to bullets (they get shot often) and missiles (military planes fire at them). These creatures also fight one another – a lot– in glorified Sumo matches. In one corner are the bad guys: Rodan, a winged creature who lived in a volcano, and Ghidorah, an ugly three-headed dragon who seems indestructible. Both breathe fire-lightning. In the other corner are the good guys, including Godzilla.

3. It Doesn’t Have the Thickest of Plots (But Who Cares?) 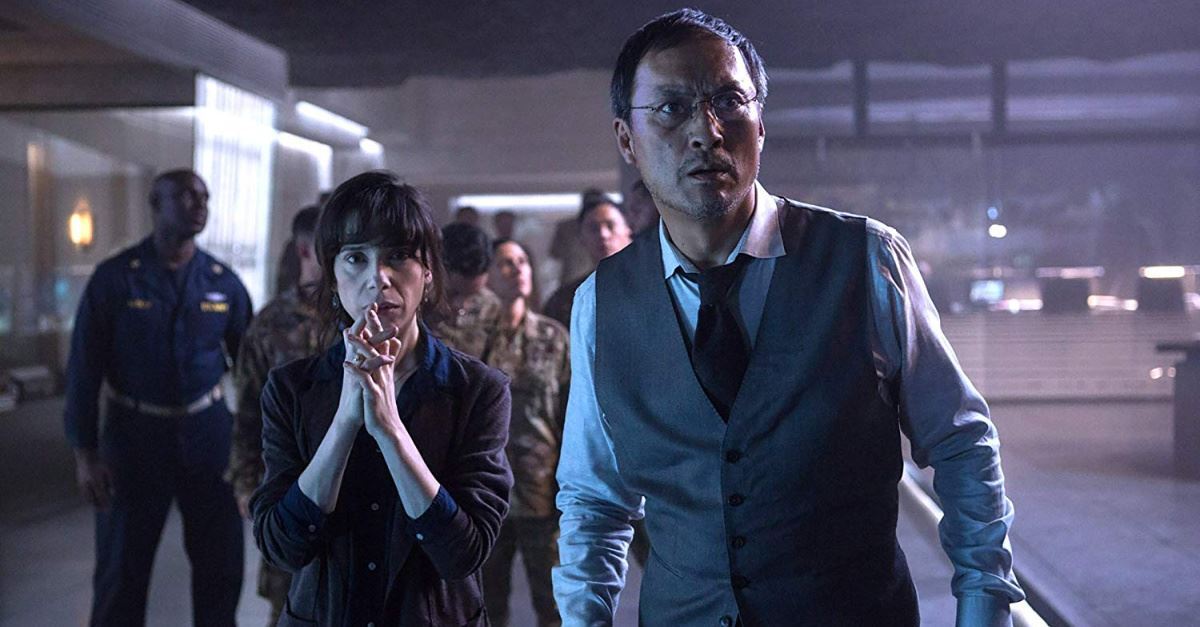 It can be simplified thusly: “The Titans are on the loose. How do we stop them?” More specifically, the plot focuses on an organization, Monarch, that was tasked by the U.S. government to destroy the titans but instead is searching for benevolent titans, like Godzilla. This divide becomes moot when a rogue scientist decides the Titans must be unleashed on earth to bring an out-of-control human population in check. The scientist then sets out to find more creatures: “Humans have been the dominant species for thousands of years and look what’s happened.”

But who cares if King of the Monsters has a simple plot? We’re watching it to see Godzilla go berserk, right? 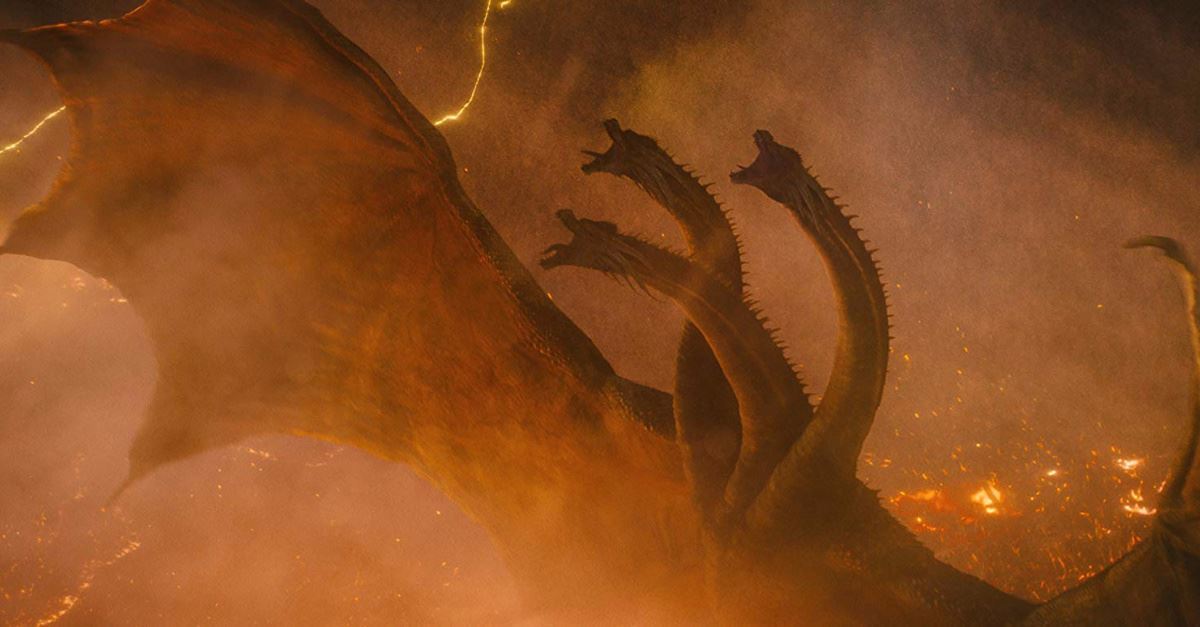 The movie is visually dark, from beginning to end. Seriously, why can’t these monsters fight during the daytime? They only fight when it’s raining, when it’s nighttime, or when something is blowing up. This adds to the movie’s eerie feel. Rodan and Ghidorah look like pets from the pits of Hell. Godzilla – as benevolent as he may be – has the appearance of an angry, flesh-eating dinosaur. The CGI is impressive, which further adds to the realism. Most young children likely would have nightmares after watching it. The movie also has a significant amount of language: s--t (8); h-ll (8); misuse of “Jesus” (6); GD (3); misuse of “God” (3); misuse of “Christ” (1); d--n (1); b--ch (1); f-word (1); a-- (1); SOB (1).

5. It Has a Surprising Family Angle 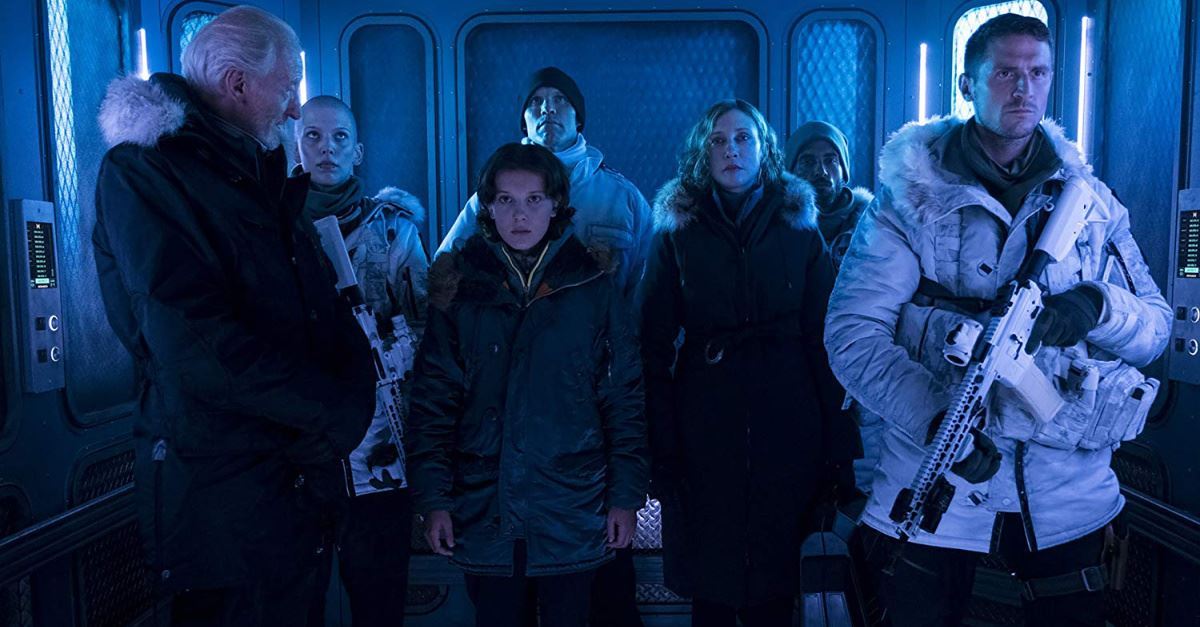 Monarch member Emma Russell split from her husband, Mark, following Godzilla’s 2014 attack on San Francisco. That attack resulted in the death of their son, Andrew. Mark bemoans how he handled that tragedy (he began drinking heavily in front of his family). We see him watching old family videos, longing for the times when he and his wife and children were together. With Godzilla again on the loose, he makes a promise not to lose their last child, Madison. It offers him a chance at redemption.

6. It Has a Worldview Worth Discussing 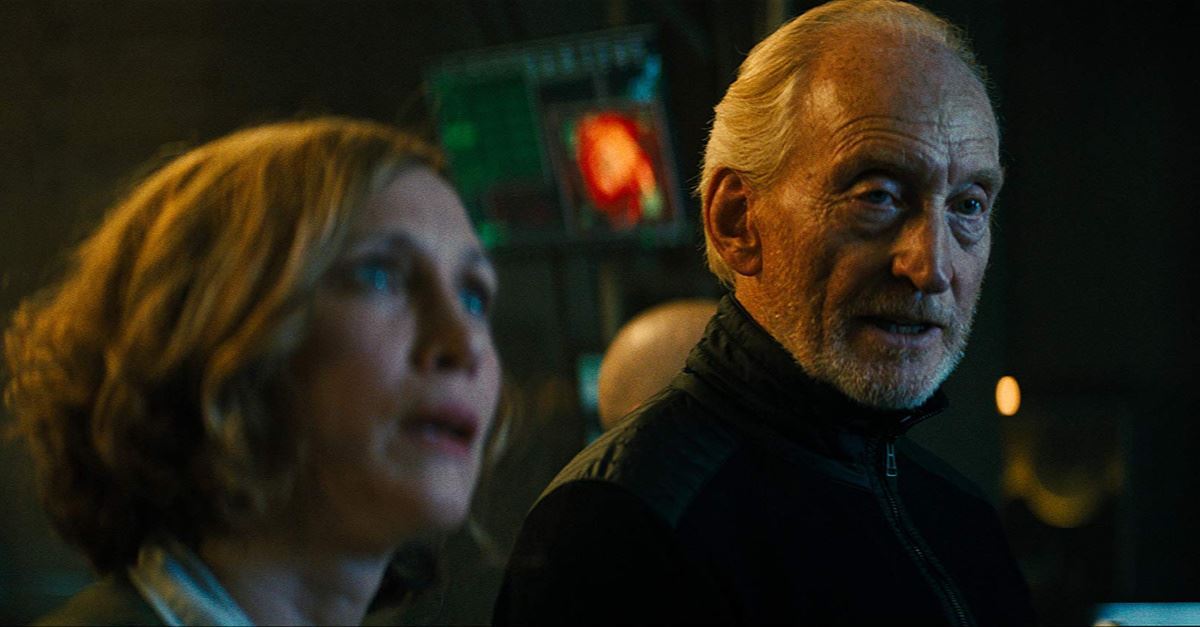 Godzilla, we’re told, is part of an “ancient and forgotten species.” One character, Dr. Ilene Chen, references her Eastern beliefs and says dragons are “sacred, divine creatures” that bring “strength” and “redemption.” Later, she says in amazement, “They really were the first gods.” It provides Christian families the opportunity to discuss the differences between Eastern religions and Scripture. But the film has a couple of Christian elements, too. When Rodan is sitting atop his volcano, we see a large cross in the foreground, untouched. We also watch a soldier perform the sign of the cross.

Finally, the movie raises the question: Has humanity been a detriment to the planet? That’s what the rogue scientist thinks, pointing to overpopulation, pollution and war. “We are the cause,” she says. 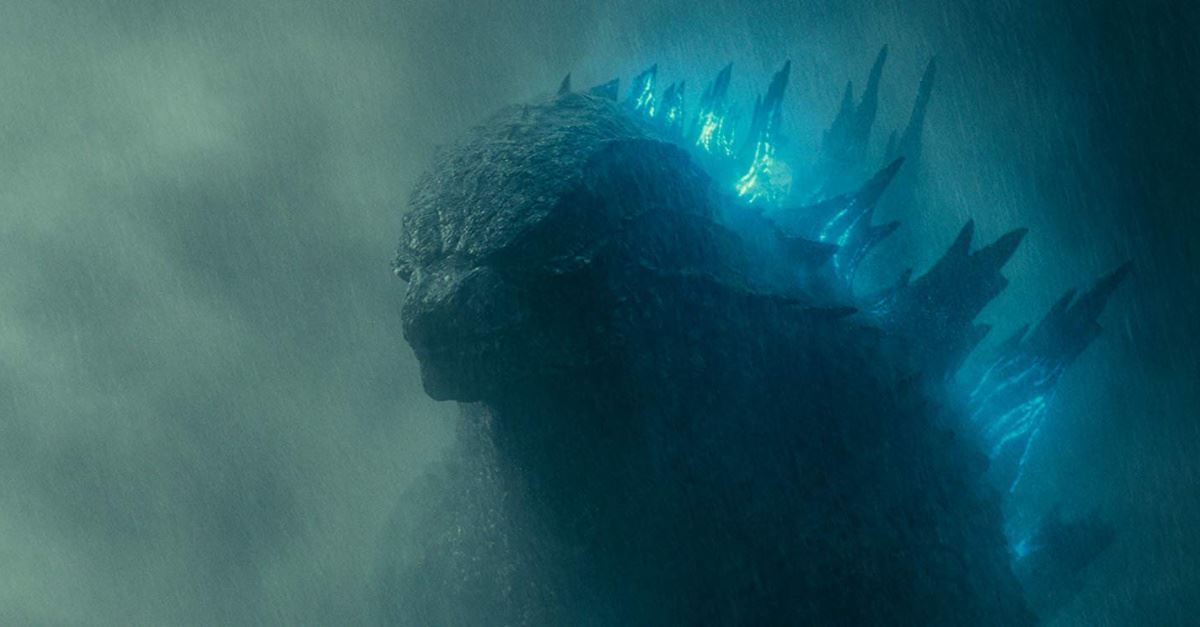 Don’t leave your seats when the credits roll. The first half of the credits includes scenes showing how Godzilla has benefitted Earth. Although there isn’t a mid-credit scene, there is a post-credit one – and it’s key to the franchise’s plot. It’s not clear, though, if it’s a teaser for Godzilla vs. Kong or a bridge to a future, unannounced film.

Entertainment rating: 2.5 out of 5 stars.

Family-friendly rating: 2 out of 5 stars.

Rated PG-13 for sequences of monster action violence and destruction, and for some language.

This content first appeared on Crosswalk.com and is used here with permission. To view the original visit: https://www.crosswalk.com/culture/features/things-to-know-about-godzilla-king-of-the-monsters.html