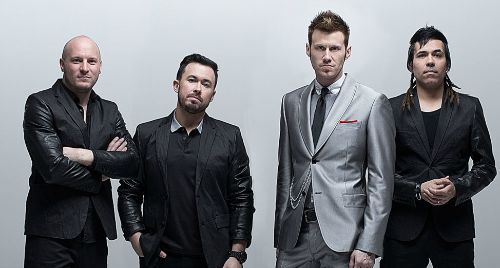 Quite often the gifts that God gives believers take on an added potency when simmered in the sauce of experience. Such is the case with Building 429, the talented pop/rock outfit that topped the charts in 2004 with "Glory Defined" and proceeded to build one of the Christian music community's most impactful ministries.

Now after nearly a decade in the national spotlight, Building 429 has teamed with Provident Music Group for their fifth album, Listen To The Sound. "It really is the overflow of the life that we've lived over the last two or three years, especially this past year," says lead vocalist Jason Roy. "I'm a worship pastor now and that has been a huge part of the lyrical content of this record. It's about the lives that I've been involved with.  This really does come from a much more honest place."

Drummer Michael Anderson agrees. "Individually we're all on a different spiritual level than we've ever been," he says. "We have great home churches now that we're happily involved in.  Our family lives at home are better than they've ever been and our relationship as a band is light years above what it's ever been. I think that really shows through with this new music."

Blessed with one of the most distinctive voices in any genre of music, Jason overcame a turbulent childhood and found solace in the church and in music. He launched Building 429 determined to make a difference in the lives of others needing to hear the truth of the gospel. The band broke through with the powerful hit "Glory Defined," which was named BMI's Christian Song of the Year in 2005. That same year Building 429 was named New Artist of the Year at the Gospel Music Association's Dove Awards and the band was also nominated in the Rock/Contemporary Album of the Year and Song of the Year categories.

In the past few years, Jason, Michael, guitarist Jesse Garcia and bassist Aaron Branch have toured heavily. They've hit the road with Casting Crowns, tobyMac and other acts as well as headlining several treks, including Food for the Hungry's SummerFest 2009 and 2010 and Food for the Hungry WinterBlast 2010 and 2011. But even as they were touring the country and pouring into the lives of others, Jason and his wife Cortni found themselves becoming increasingly involved in their home church in Clarksville, TN.

Jason was on tour in New Mexico when he got a call saying their worship pastor was leaving and they needed Jason to fill in. He confesses he'd always been hesitant to lead worship, but didn't want to say no. "So I went in and I led the Christmas service and it was awesome," he says.  "I had a blast!  I was surrounded by people who desired to grow musically and spiritually. I felt like God did something with me there that he hadn't done with me on the road in a while. I called up the pastor and said, â I think God has called me to do this.'"

Simply being obedient to God and serving his home church had a powerful impact on Jason and began shaping this new chapter in Building 429's career. "I started doing life with people," Jason says with a smile. "I've started plugging back into the church and I started getting fed again. When I became a leader of a worship group that's 80 plus people, I started seeing that all the things that I learned on the road were actually able to elevate what we were doing at home in the church. What I did with the band fed what I did in church and now when we made this new record with Provident, what I did at the church---the life that I live there and the mentoring and the people that mentored me and the spiritual depth that has come from that---is now feeding the Building thing. I never saw that coming."

Collectively the songs on Listen To The Sound acknowledge life's struggles, but point to the hope, grace and love of God. "I think what this record does is it makes you take a look at your life and say â I'm connected to it because it's the truth that I don't tell anybody else about.  This is where I am,'" Jason says, acknowledging that the record is encouraging families struggling in this tough economy, people dealing with depression and other challenges. "This record keeps coming back to the point that this is not what we were made for, that this is not our home. It is hitting people in the midst of a struggle, but it's doing it in this pop kind of thing that makes you smile while you listen to it."

Songs like the title track, "War Zone," "Where I Belong" and "You Save Me" are resonating strongly with people in the midst of trials, including Jason's own father, who calls daily to tell his son how this new music is ministering to him. "I finished the record and I sent the songs to dad and he literally asked me, â did you write these songs about me?' The answer to that question was â no, not intentionally,'" Jason says.  "But it also proves to me that all of us struggle in a lot of ways with the same stuff. We really do.  It's how you choose to handle the situation that you are in that defines who you are."

Splitting production duties between co-producers Jason Ingram and Rusty Varenkamp, and Rob Hawkins, Building 429 has crafted a record that is sonically vibrant and lyrically substantive. Jason wrote or co-wrote nine of the ten tracks. "War Zone" is the only outside cut, but ended up being the song that would pull the album's theme together. "When I heard â War Zone,' I was like â I would say that,'" Jason proclaims. "It did something for me," he says. "It empowered me to realize, â This is a war zone! My hands are tired. My faith is worn, but I run because I need you God.' This album centers on the idea that nothing is as it seems. This life is not where we belong, or where we are going. So daily, we have to fight for our faith and our families, and â War Zone' says it all."

Michael Anderson cites "Made for You" as his favorite song on the album "just because of what it says.  We were all created to be living in community with our Lord, our savior Jesus Christ. That's what it's all about and besides that, it's just a really fun track to play live. It's just really cool to get to share that with people."

Jason enlisted his worship team to sing on the album's opening track "Made for You" and "Where I Belong." He also recruited a very special guest to sing the duet "I'll Be With You." "I'm a fan," Jason says of Fireflight's frontwoman Dawn Michele. "I wrote this song with a second verse designed for a female vocal. I've always loved Dawn's voice, not to mention that she is a natural born rock star.  It is a blessing to have her on the song."

Recording the whole album was an enjoyable experience for the seasoned pop/rock outfit. "We're just much more comfortable as a band, and it all starts with our spiritual walk," says Michael. "We're much more mature now. This was the most relaxed and the most fun we've had recording a record.  We all played on it and we were all in the studio pretty much the whole time while everybody was recording.  It was fun to be there and to be able to encourage each other. This is definitely a record that the band was most involved in every little part of it."

Experienced, mature, and as dedicated as ever to sharing God's truth, the members of Building 429 are excited about this new season in the band's ministry. "This is where God has put me right now and I hate to quote my own song, but it really is about just â one foot in front of the other,'" Jason says with a smile, citing the uptempo anthem "One Foot." "We just have to focus on this moment. It's time for us to value every second that we have and use it all for the glory of God."